Although my original plan was to release Connection in early June and Bully & Exit in August, I’ve had to make some changes to my release schedule.  Connection isn’t ready. I thought it was but as it went through numerous beta edits, a theme emerged. Putting all of the comments together led me to one conclusion: I have problems with pacing.  With the help of my wonderful betas, I created a new outline.

Sifting through the comments and suggestions and putting them into a coherent plan wasn’t easy, but I feel confident that the new outline will fix the problems.  I don’t want to rush it though, and feeling pressured to get the book done wouldn’t have made it better.  Not to mention the fact that the new outline will most likely lead to Evan and Jeremy’s story being two books rather than one.  I want to have both done before I release the first one, and I don’t know how long it will take for me to finish it.

Rather than put myself under more pressure, I decided to swap the releases.  I don’t want to give you an exact date (because that never seems to work) but Bully & Exit will be released soon-ish. Certainly this summer.  It’s on its second round of beta edits and (fingers crossed) will only need a bit of polishing this time around.   I have a cover done, although I am not sure it’s the final, final cover, it’s coming together.  So as an apology for making you wait longer for Connection, here’s a teaser for the book you’ll be getting instead. 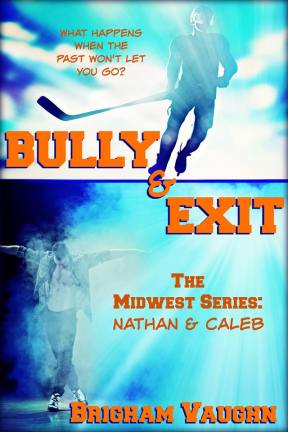 Nathan’s voice was soft when he spoke, gentle like it’d always been. “Caleb Stockwell. I’ve been looking for you.”

Caleb cleared his throat and ignored him, tipping the bottle up for another long drink. He licked the spiced rum off his lips as he debated making another run for it. There was a shrub blocking his way in one direction and a hockey player in the other. Even if he hadn’t been drinking, the odds weren’t in his favor. “Nathan Rhodes,” he managed.

“Damn I can’t believe it’s you!” Nathan leaned in and Caleb pulled back, uncomfortable with him being so close.

Caleb laughed bitterly. “It’s me. Now that you’ve satisfied your curiosity, you can run along now.” He motioned with his hand, encouraging Nathan to leave.

“It’s really good to see you,” Nathan said, ignoring him. He took a seat on the pile of discarded construction materials, his knees brushing Caleb’s as he lowered himself down. Caleb pulled away as if scorched.

“Yeah? Too bad I can’t say the same,” he muttered, his head swimming as the alcohol began to hit him. He eyed Nathan’s long, long legs and the way he was pinned in by them, remembering the way they’d felt tangled with his as they came, panting shallowly against each other’s skin. It brought it all back: the scent of Nathan’s cologne, the taste of his skin, the way Caleb’s heart raced in his chest when Nathan held him close. It brought back the memories, the ones he’d worked so hard to run from. The good and the bad. The sharp, intense happiness of falling for Nathan. The aching, crushing hurt that paralyzed Caleb for months after Nathan was no longer in his life. Everything he’d buried four years ago and vowed never to touch again.

He caught the first glimpse of doubt on Nathan’s face. “Are you okay, Caleb?”

“Oh, I’m mother fucking peachy,” he snarked and took another long drink. “I’ve made it through four fucking years trying to ignore the fact we’re on the same campus and with barely a month left in my senior year, I thought maybe I’d managed to pull it off. But no, Lowell had to drag me to this goddamn party, and of course you showed up too. Just my luck.”

He raised the bottle again, but Nathan wrapped a hand around the neck and tugged. He was stronger than Caleb, so Caleb let go, afraid he’d end up getting pulled into Nathan’s lap if he didn’t. Nathan took a drink and passed the bottle back, licking the taste of rum off his lips before he spoke. “You’re so angry at me.”

“Ya think?” Caleb snarled. “Didn’t it ever occur to you I would be? What the hell makes you think you can waltz in here and pretend like all the shit that went down between us didn’t happen?” He tried to stand, but Nathan’s dark denim-clad knees were on either side of his, pinning him in place. The bottle was pried from his suddenly limp fingers and set aside.

“I don’t think that,” Nathan protested. “I was just glad to see you and I… I wanted a chance to apologize. I didn’t… I wanted….”

Caleb’s lips parted in surprise as cool fingers framed his face and for the first time in four long years, Nathan’s lips were pressed to his again. Involuntarily, Caleb’s eyes closed, feeling a rush of heat wash over him, taking him right back to the first time. Before Nathan broke his heart.

4 thoughts on “Change of Plans”