It’s been a difficult couple of weeks for me with writing. Two friends are going through rough times in their lives, I passed the one-year anniversary of when my ex and I split, and my left wrist staged a revolt.

I’ve never had any problems with tendonitis before, but I do sleep with my hands in funny positions and I’ve been swimming 3-4 times a week. I think those things, combined with writing, finally did my left wrist in. I spent the past week icing it, taking anti-inflammatories, using a wrist brace, doing gentle physical therapy exercises and, mostly, giving it a rest. It’s slowly improving and today was the first time in a week I’ve written more than a few sentences at a time.

My novels are on hold for the moment, but I am going to order an ergonomic keyboard and hopefully in another week or so, be back on track.

Without further ado, here’s my flash fic for the week! 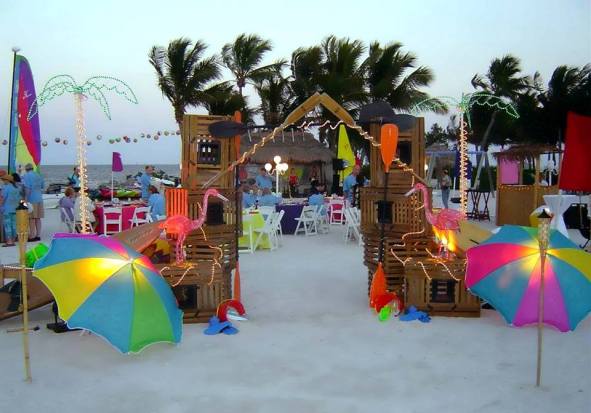 “This is the resort you were raving about?” Stuart’s lip curled into an all-too-familiar sneer. “Their sunset dinner on the beach looks like a four-year-old’s birthday party.”

I stifled a sigh and settled the Panama hat more firmly on my head before the ocean breeze carried it away. The resort did have a casual vibe, with brightly colored, kitschy decorations like tiki torches and light up flamingos, but it wouldn’t kill Stuart to unwind for once.

“It also has white sand beaches, 5-star quality food, and the best drinks I’ve ever had,” I reminded him.

“If the food doesn’t deliver, I’m out of here,” Stuart threatened. “I mean it, Charlie.”

“I know you do, darling.” I patted Stuart’s shoulder and he made a grumbling noise in the back of his throat but allowed me to steer him toward the party on the beach.

To be fair, Stuart was paid to be critical. He’d worked as a restaurant critic for years. He was insufferable when we traveled, however.

I made a beeline for the bar, leaving Stuart to find a table for us. His sneer was firmly in place when I returned with two drinks.

“Just drink it. I asked the bartender to add a little something extra for you. It should help loosen you up.”

Stuart’s sneer melted into a look of contemplation. “Maybe this place is looking up after all.”

I knew he wouldn’t be averse to a little experimentation—it wouldn’t be the first time we’d indulged while on vacation—and lord knows, I needed all the help I could get. The last thing I wanted was Stuart pouting in our suite all night.

“Cheers!” We clinked glasses and he took a hearty sip.

“Not bad,” was his grudging verdict.

I smiled and looked out over the waves.

Several hours later, after a dinner that even Stuart had deemed exceptional, we stumbled from the dance floor toward the bonfire. I dropped onto a driftwood log with a quiet groan of relief. We hadn’t danced like that in ages.

I glanced over at Stuart. With several drinks in him, his cheeks were flushed and his normally tidy hair was wind-ruffled.

He slid an arm around my waist and leaned in. “What do you say we head back to our suite?”

“Aren’t you having fun?”

“I am. But I thought it might be more fun to take you to our room and thank you for bringing me to such a great place.”

I knew that was the closest I’d get to an apology for his early pouting, and decided to take it. “Sure, but you’re going to have to get me off this log.”  I’d just sat down and the hike across the sand to the main building seemed awfully far.

With arms wrapped around each other’s waists, we stumbled toward the lights of the resort. Stuart paused and nuzzled against my cheek with his lips. “What was in those drinks, anyway? I feel incredible.”

Stuart sputtered in surprise as I dragged him toward our room.

The good news was, Stuart never held grudges for long.

Please visit the flash fic group on Facebook and check out the links to the other authors’ flash fics.

I look forward to seeing you next Monday!

3 thoughts on “Flash Fiction Monday – The Power of Suggestion”