I dragged my heels on getting the paperback out for “Between the Studs” *hangs head* but I got it done along with “Corked” so they are both available now on Amazon and Barnes & Noble! Just in time for Pride events! 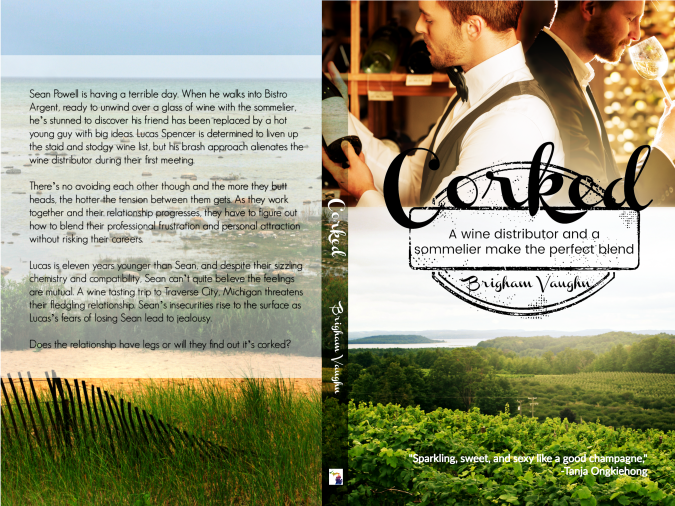 I would be delighted to sign a copy (of any of my books) and send it your way!

Sudden changes require great bravery. Can both men find the courage to be true to themselves and each other?

Ronan Collins has spent most of his life in Dublin hiding who he really is. Coming out would hurt his mother, and Ronan isn’t going to be the second gay man to do that. When he receives news the father he has never known has died, leaving him both a house and a business in Amsterdam, he jumps on the opportunity to get to know the man who fathered him and to discover what he’s been denying himself for years.

Lucas Brandt thought he had it all when Paul Kelly offered him a job and rooms to live in. With Paul deceased he fears he may be about to lose both. He didn’t even know Paul had a son, and now this stranger is on his way from Dublin to pull the rug out from under Lucas’s feet.

The two men don’t expect to like each other, never mind feel attraction. With numerous reasons why hooking up would be a bad idea, why does giving in feel so much better? And is Ronan’s back story really as he’s always imagined it to be?

Ronan seemed to search Lucas’s face for something, then lowered his gaze until Lucas was convinced he was staring at his lips. He mused that the sunshine had to be getting to him as the afternoon took on a dreamlike quality. Ronan licked his lips, the tip of his tongue tempting Lucas, teasing him. When Ronan leant forward Lucas wondered what was happening, whether he was imagining things. Surely Ronan wasn’t about to —

The soft press of Ronan’s lips against his elicited a sigh from Lucas. He would have been embarrassed about his reaction if he hadn’t been lost in the moment. It was the second time Ronan had taken him by surprise in this manner, except on this occasion he didn’t appear to have any intention of pulling back.

With so many reasons why this was the worst idea ever, it didn’t make any sense that the overriding thought running through his mind was more.

He cupped Ronan’s neck, keeping the pressure light, barely there. Ronan reacted as if Lucas had used force and pressed his lips firmer against his, parting them in the process.

Lucas was helpless against the onslaught. It had taken him days to stop obsessing about Ronan’s mouth after that quick, shy kiss a week earlier. There would be no coming back from this. He had no doubt he would end up hurt. Even as he had the thought, Lucas parted his own lips, slipped his tongue through the gap and tentatively caressed Ronan’s mouth.

“Oh.” Ronan’s soft exclamation meant his lips parted farther and Lucas took advantage. Fuck being sensible. Fuck worrying about tomorrow, or next week, or six months from today. He was here, now, and the tongue hesitantly exploring his was nothing like what he’d expected and everything he wanted it to be.

The kiss transported him back to his teenage years, to the first boy he’d ever kissed. Clumsy and with clashing teeth, it had been as awkward as it had been exciting. Pretty much as it was now, except this time it didn’t make sense.

He pulled back until the tips of their noses were the only parts of them still touching. Ronan’s lashes fluttered before he opened his eyes. They widened and he lowered his gaze.

“That bad, eh?” Ronan directed his words at the grass beneath their knees.

“Not bad.” Lucas tried to figure out what to say. Not sure what he was reacting to, he didn’t know which words to use either, so the truth would have to do. “It just brought back a memory of something I hadn’t thought about in ages.”

Ronan still wouldn’t look at him and Lucas didn’t like it. He lifted Ronan’s chin with his index finger. “It reminded me of when I was fourteen and me and Hans, my best friend back then, decided to find out what the big deal about kissing was.”

“It was like your first kiss?” Ronan still tried to avoid meeting Lucas’s gaze.

“Yes.” Lucas smiled. He couldn’t believe Hans had slipped his mind. They’d done a lot of exploring together before Hans decided he was interested in girls after all. He got so lost in his reminiscence he almost missed the words Ronan muttered.

It hit Lucas like a ton of bricks. Here was yet another reason why getting involved with Ronan was the worst idea ever. If he was right, he would be Ronan’s first in everything. The thought that Ronan’s inexperience might include kissing hadn’t crossed his mind until this moment. He wasn’t sure he could make that journey with Ronan without getting emotionally involved. He had to know for sure.

The combination of shame and defeat Lucas read in Ronan’s expression tore at him. He didn’t need an answer. He also didn’t need to think about what to do next. Yes, he would end up getting hurt, but he’d deal with it. It wouldn’t be the first time or, in all likelihood, the last. He could be Ronan’s first and make it a good, a memorable, experience.

“I want to be your second, too.” He didn’t wait and pressed his lips back against Ronan’s before he could respond.

I’ll be the first to admit, I am totally biased when it comes to Helena Stone’s books. We’re friends. I was staying at her home in Ireland when I beta read “Double Dutch Courage”. But biased or not, it’s a wonderful story.

“Double Dutch Courage” follows Ronan Collins from Dublin to Amsterdam as he learns about an inheritance left to him by his absent father, Paul, and begins to take the first steps toward being open about his attraction to men. Lucas Brant, Paul’s business partner and flatmate, helps guide Ronan along that path.

The author deftly weaves in Ronan’s discovery of Amsterdam through the story and it plays such a large role in the book, it needed to be mentioned. It’s wonderful and vivid and makes me want to travel there (more than I already did)!

This is a quiet story. Ronan’s journey doesn’t have huge, wildly dramatic twists and turns, but the gently unfolding self-discovery is no less compelling. The attraction between them and the building relationship is skillfully done and you’re rooting for them as Ronan overcomes those final obstacles and moves forward into the kind of future he’s always dreamed of.

“Double Dutch Courage” has wonderful characters, a fantastic setting, and a sweet romance. What more could any reader want?