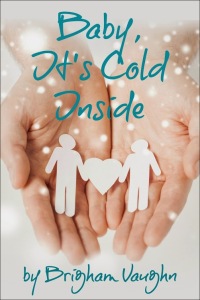 A trip to visit his boyfriend Nate’s parents during the holidays leaves Emerson a nervous wreck. Bad weather and an unfortunate mix-up leads to an awkward first introduction, and as things deteriorate from there, Emerson begins to doubt if their relationship will survive the stressful weekend. Can Emerson get their relationship back on track and impress the Collins family in time to have a Merry Christmas?

Both boys stomped their feet and dusted the snow off as they got themselves situated. Nate dug in his pocket for his keys but Emerson stopped him, wanting one last kiss before he braved meeting the future in-laws. Because no matter how short of a time he had been with Nate, he knew that was what he wanted. He wanted to spend the rest of his life with Nate, buy some little house in a neighborhood like this and have a life together with a couple of kids and maybe a dog. Just because he was young and gay didn’t mean he didn’t want the kind of life his parents had together.

They weren’t going to rush things by running off and getting married too soon; they were trying to be practical about it. But Emerson knew what his goal was, and in order to achieve that he had to impress the people he would someday be related to by marriage, and he was scared shitless he’d screw it up. He let go of the handle of his suitcase and set the large shopping bag full of presents down on the cement. “Kiss for luck?”

Nate looked up at him, his eyes crinkling as he smiled. “Sure, Em.”

He lowered his own bags down and took Emerson’s face in his hands, his gloves—still lightly dusted with snow from touching the trunk lid—were cold on Emerson’s cheeks, but his lips were warm and soft. “They’re gonna love you, I know it,” Nate said when he drew back.

“I hope so,” Emerson said with a sigh. He couldn’t imagine what it would be like if they didn’t. He kissed Nate again, this time with a little tongue and he felt more than heard Nate chuckle. They were pressed flat against each other—Nate’s hands still cradling his face, and Emerson’s hands on Nate’s hips—when the door opened. The sudden rush of warmth and light into the cold, snowy night made them jerk apart and Emerson’s cheeks flooded with heat. Shit, not the way I wanted to meet the parents, he thought, feeling a rush of disappointment. It wasn’t supposed to go like this at all.

Click on any of the buttons above to purchase the book at your favorite retailer or save it on Goodreads.