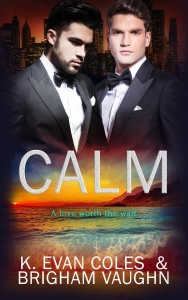 A love worth the wait

When Riley Porter-Wright comes out as bisexual and confesses his feelings for Carter Hamilton, it severs their friendship. Carter’s rejection forces Riley to move on and he’s shocked to learn Carter’s marriage has fallen apart.

Overwhelmed by his failure as a husband and father, Carter misses Riley, but feels guilty for disappearing after Riley’s coming out. After Riley extends an olive branch, the former friends agree to repair their relationship. Slowly, Carter pieces together a new life, admits his attraction to men and confesses his feelings for Riley.

Leery of Carter’s initial rejection, Riley turns his focus to a new man, Will Martin.

Disappointed, Carter fosters new friendships with men like Jesse Murtagh and Kyle McKee, while also navigating new waters with his ex-wife, Kate, as their children learn their parents are dating other people.

As they rebuild their friendship, both Carter and Riley draw strength from each other, hoping the choices they’ve made are for the best.

The restaurant door flew open. Startled, he straightened and turned to see a scowling Will Martin.

“What the hell, Riley?” his date snarled. “I thought you were going to be right back. You missed my best man speech, cutting the cake and their first dance. I had planned to ask you to dance, but you’ve been out here talking to Carter. Or ignoring me, I’m not sure which.”

“Shit. I feel terrible, Will, I didn’t mean to take so long…”

“This is getting ridiculous. I’ve done my best to be understanding about your relationship with him. You’re good friends and I respect that. Hell, I respect that you still have some lingering romantic feelings for him. But this has got to stop.”

“Will…” Riley said weakly, hating that he’d hurt someone who had been so good to him, but unable to deny that he didn’t really know where things stood with Carter. “I never meant…”

“I know you didn’t, but it doesn’t change the fact that I feel like I have to compete with your best friend for your affection. Not to mention your attention.”

“I told Carter that I know I need to focus more on my relationship with you. That I need to make it more of a priority.”

“It shouldn’t be so damn hard to want to spend time with me.” Will smiled sadly. “You left me, at one of my closest friend’s weddings, to talk to him. I need you to make a decision about your priorities. Because right now, I feel like I rate pretty low.”

“I am honestly, sincerely sorry. I made a mistake and I want to fix it.” Riley stepped closer. “Please, let me make it up to you.”

But Will shook his head and stepped back. “I need some space. Spend a couple of days figuring your shit out with Carter. Then we’ll talk.” He reached for the door to the restaurant and Riley went to stop him, then hesitated. Although he wanted to chase after Will and apologize again, Will had a point. Riley wasn’t sure about his feelings for Carter and maybe he needed to make that decision before he did anything else.

Long after Will had disappeared, Riley stood and stared at the door of the restaurant, deep in thought.

Click on any of the buttons above to purchase the book at your favorite retailer or save it on Goodreads.