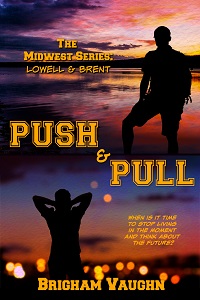 It was just supposed to be a road trip. But it could be so much more.

Brent Cameron is a former college hockey player and newly out of the-closet. He has his whole future planned: a summer road trip around Lake Michigan, working to pay for grad school, and finding a guy to settle down with. Preferably, one who’s a jock like him.

With a love of sports, a flair for fashion, and a disdain for anything conventional, Lowell Prescott is out-and-proud. Burned by past relationships, he’s determined to protect his heart. Especially from jocks who want to change him.

After Brent’s travel plans are dashed by a sudden cancellation, Lowell is his only option. Tempers fly and sparks flare as the miles disappear behind them. But by the time they reach the halfway point, their animosity has too.

When the past threatens to derail the trip and the fragile relationship they’ve built, Lowell must risk heartbreak, and Brent must open himself to new possibilities to hold onto a future neither of them knew was possible.

“Do you really mean to tell me you don’t want to get to know me in all sorts of ways? I don’t believe that. I’ve seen the way you look at me.” Lowell reached out and dragged a finger across the black fabric of Brent’s T-shirt before circling his nipple. Brent flinched again, backing away, even as the skin tightened and his nipple hardened to a pointy little nub.

Flustered and irritated by the reaction, Brent pushed Lowell’s hand away and crossed his arms. “You’re nuts if you think I’m taking you with me on this road trip.”

The smile and words only served to make Brent angrier. He looked back at Nathan, feeling used. “Have you all just been cooking up this plan while I’ve been gone?”

“We’ve been talking about it for a couple of weeks, yeah,” Nathan said softly. “Trying to figure out the best solution.”

“What the FUCK? You couldn’t be bothered to mention this when we talked?”

Nathan’s uneasy look deepened. “I thought it might be better if we could discuss it in person.”

“You could have fucking called me and said, ‘Hey, can we meet in person? I need to talk about the trip with you.’ Don’t I at least get a say in what happens with the next two months of my life? Jesus, you guys are unbelievable.”

Nathan opened his mouth but Lowell spoke first. “Look, Brent, I get that you’re pissed, but you don’t have a lot of options at the moment. Frankly, you’re between a rock and a hard place right now, and I’m your only solution. Either you cancel your trip and lose money, which sucks. Or you change your plans and go by yourself, which also sucks. Or you take me. I also suck, but in much more enjoyable ways.” Lowell winked.

Brent gaped at him for a moment. Lowell stepped forward and put his finger under Brent’s chin. “Unless you’re offering to do something useful with that gorgeous mouth, I suggest you close it.”

Brent snapped his mouth shut fast enough to rattle his teeth. “What the fuck are you talking about?”

“I know what sucking cock is,” Brent yelled, confused and annoyed by the pretty twink with the big eyes who always made him feel off-kilter and out of control.

“And make all the jokes you want, but this isn’t fucking funny. My whole summer is ruined.” Brent turned to Nathan. “And you. You’re a complete traitor. You’re right though, I have no choice but to put up with him.” He jerked a thumb to indicate Lowell. “So fuck you, Nathan. If you think I am going to forgive you for saddling me with that cock-hungry twink for two months you have another thing coming!”

Nathan made a sound of protest. Brent scowled and held out his hand to Lowell, ignoring Nathan completely. “If I’m stuck with you, then we’re taking your car. And hand over the damn keys. I’m driving.”